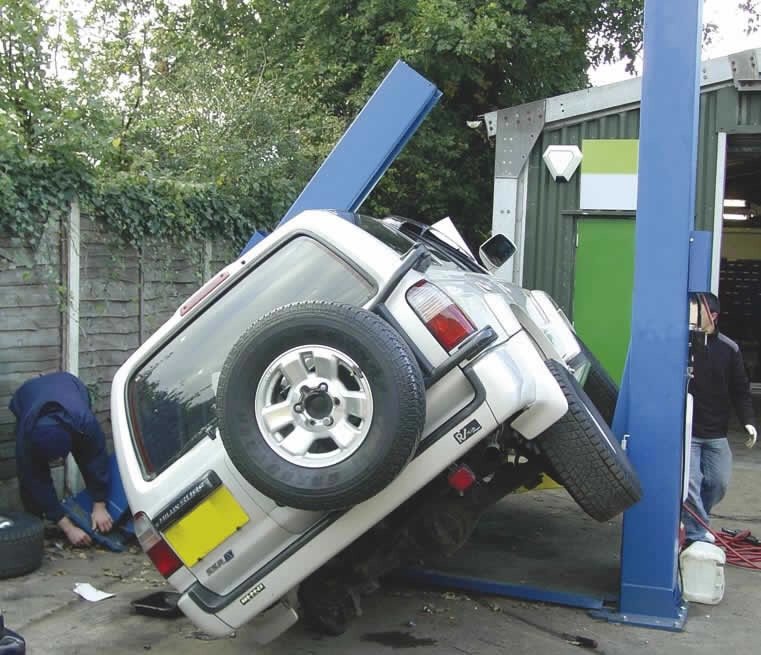 Working underneath vehicles is an everyday occurrence, checking for faults, carrying out servicing or repairs these tasks are so common we get used to the fact that we are working under potentially lethal weights. Despite the dangers and precautions being well known serious and very often, fatal accidents are still happening every year.

Sadly in many such cases, those accidents and fatalities could have been avoided.

Below are some extracts from HSE inspectors' accident reports involving people working beneath vehicles in the motor repair industry. The extracts dont cover every danger and they dont go into every detail of how each event happened but the extract itself should make us aware more than ever that technicians must know how to use the lifting equipment and the dangers involved. In many cases it proves lift maintenance is a must.  :

1. The HSE investigation confirmed that the workshops two-post lift was installed into concrete of unknown strength. During the removal of the transmission of a large 4 x 4 vehicle three people had been underneath the raised vehicle. They had moved away minutes before the lift collapsed without warning. No Load Test had ever been carried out on any of the lifts in the workshop.  Thankfully in this case no-one was injured.

2. A technician was working on a two-post lift when the car "fell off" killing him. The HSE investigation confirmed that the arm locking mechanism ceased to work and that the lifting pads were damaged, some were missing altogether?

3. A technician working on a car was standing at the end of a raised four-post lift and pulled the car towards him. There were no end-stops on the lift and he was unable to stop it falling off the lift onto him. He died in hospital from crush injuries. The HSE investigation found the lift had never been thoroughly examined, serviced or tested?

4. Two men were using a chain block suspended from a gantry to remove an engine from a vehicle. As one of the men turned his back on the raised load, the other man moved the gantry causing it to fall onto his colleague’s head, killing him. The HSE investigation confirmed that the men were not following a safe system of work.

5. A two-post lift was being operated by an employee while the owner worked beneath it. A drive nut failed and the vehicle fell onto the owner, killing him. The HSE investigation confirmed that the safety back-up nut had become detached a long time ago and nothing had been done to rectify the situation. The lift had not been thoroughly examined and tested.

6. A mechanic was working underneath a van attempting to free a seized handbrake. He managed to release it but the van, which was parked on a slope, rolled forward, crushing him to death.

7. A trainee HGV fitter, working with an experienced mechanic, was fatally crushed when an HGV slipped from a hydraulic jack. The HSE investigation confirmed that axle stands were available, but not used. It was also disclosed by the HSE that an almost identical accident, again involving a trainee working with an experienced fitter, happened three years earlier at a different company.

A lot of garage owners still believe that an inspection from the Insurance Company involves a service, this is not true.