If you know Hofmann Megaplan, you will know the high quality products they make. If you take everything everyone loves about the 700 and 800 series of the last two decades, the 813XL introduces another well-known and 'loved by many' design feature into its high-end specification. Anybody who remembers the parallelogram arm design of the 'Butler' machines of the '90s may well harbor fond memories of it's ease of use, but the odd nightmare about its contact with the rim despite the plastic demount tool. The 813XL Racing takes that parallel design but offers the automatic 'locking' of a traditional machine, ensuring that the head is never at any point in contact with the rim. Throw in the classic (and still the best) leverless operation and you have the ultimate system. Other notable features on this machine include the QuadraClamp turntable, 4 cylinder turntable and brand new 'IntelliPro' dual assist arm system which gives you the simplest, most effective, and most ergonomic twin-assist arm design ever produced. Hofmann invented this machine 20 years ago and although much copied its never been equalled by the competition. 240v Single phase power supply 2 Years Manufacturers warranty This product includes delivery, installation and tuition at your premises within the UK. Some of the Scottish Highlands & Islands may incur extra delivery costs, if you are located in these regions, please ring before you buy. Price Promise : We promise never to be beaten on price by our competitors, if you see a price advertised cheaper than us, we will match it for you, no problem! We simply need to make sure the item you have seen is identical and in our stock, and then we’re good to go. Please Note Pricing : Cash Price : £6,355.00 plus 20% vat (£7,626.00). Leasing Option available if required, ask us for a quotation.

Dimensions of the Equipment : 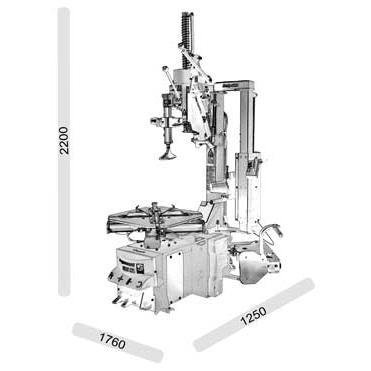 Megamount 813XL Racing is shaking up the Industry

The first Tyre Changer of its kind, the 813XL from Hofmann Megaplan, features a new concept in tyre fitting which is set to shake up the industry.For most the sight of a tilt back arm is now commonplace on their tyre machine and has been for some time. However, there have always been some drawbacks for certain users where space may be a premium or strength and speed is a priority.The 813XL from Hofmann Megaplan is the first of its kind with the introduction of the Par Move Concept. The patented parallelogram design works to eliminate flex, increase speed and reduce the required space for a machine. All mounted on a re-enforced chassis and with a robust fixed vertical tower, we could be looking at a new industry standard.

How the PAR move concept works

With the mounting head attached to a fixed vertical column, it rotates around pivot points rather than tilting back in the traditional manner. The possibility for flex from the force of the arm is all but eliminated.

The Par Move Concept also means far less space is required as all movement is achieved through a series of pivots on the front of the machine. The machine sits flush with its back to the wall and allows over 1 metre of space to be recovered.

Par Move also offers far greater precision than traditional tilt arm machines. The movement of the mounting head on a traditional tilt arm is carried out through sliding parts and manual adjustments. The pins and bushings of the Par Move parallelogram system are far more precise.